The Story of our Wedding Venue Hunt, Part 2

Part 1 (I mentioned the reasons in Part 1 that I never talked about our wedding venue hunt on the blog. But now that the wedding is over, I’m spilling all the beans!)

After we were totally floored by the behavior of Matters of Taste catering and realized that we had to ditch Glen Echo Park as our wedding venue of choice, we decided to reconsider the Pavilions at Turkey Run. That was the venue where a previous company I worked for held their annual company picnic. We had gone to visit that venue our first week of venue hunting since Ken had never been there before (and since I wanted to see it through the lens of a wedding venue hunter, not an employee attending a company picnic).

Their pavilion rental price was very reasonable, tables and chairs would be included, and although we’d have to use their internal catering service, the prices were very reasonable. We could easily stay within our $15,000 budget by getting married there, even if we had 150 guests.

So I started contacting Turkey Run again and I asked about potential dates. They got back to me and said that all their weekends in late October / early November 2011 were still available, so we could have our wedding day during peak foliage season in a nice wooded setting. Sweet!

It was time to proceed! We wanted to have our ceremony and reception at the Pavilions at Turkey Run. There are three actual pavilions that we would be renting, so we figured we could use one for the ceremony, one for the reception, and one for something else … like dancing or games. Turkey Run was mailing us a contract. 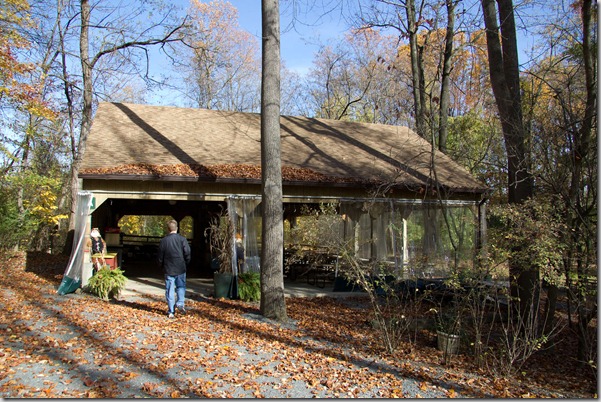 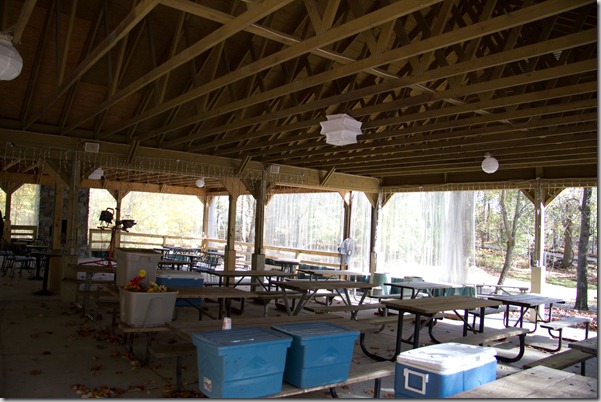 We gave Turkey Run our proposed start and end times. 3PM for a ceremony, with the reception following immediately after and going until 10PM or 11PM. They said that wouldn’t fly. They had a strict 5 hour rental time. There was no getting them to budge.

Ken and I sat down to discuss. Perhaps 5 hours would be plenty. But Ken’s family is full of talkers. They all just like to sit around and talk into the late hours of the night. We didn’t want to kick people out so quickly. We also didn’t want to move the ceremony time to any later in the day, because we wanted to make sure we had natural daylight for the ceremony and wedding photos. But, the food and venue at Turkey Run was so reasonably priced, and we could have so many fun options, like a rock climbing wall and moon bounce. We also toyed briefly with the idea of having the ceremony at a different location so that the five hours would be entirely for the reception, but we nixed it quickly. We definitely wanted our ceremony and reception to be at the same location.

Then Ken said something that changed my entire view point on Turkey Run.

That settled it. We were done. Glen Echo Park was out of the running, and now, less than two weeks later, the Pavilions at Turkey Run was out of the picture. We were nearly three months into our engagement and still had no wedding venue.

The following Friday evening when we were at home, we were both searching online for new options. I was on my laptop in the living room, and Ken on his computer in his home office. I was searching for something like “picnic pavilions DC” and tripped across a search result for Prince William Forest Park.

I browsed quickly through the site, realizing that it was another venue that probably wouldn’t pan out. I had searched for other picnic pavilion rentals in the DC area, but since most of them are tied to the operating hours of a particular park, most of them closed after dusk. And since we didn’t want a morning or afternoon wedding, that wouldn’t work.

But things were looking up. Prince William Forest Park had these entire campground things, called Cabin Camps, that you could rent all night. $540 per night! Holy smokes! That was a third of the cost of the cheapest venue we ever found. There were different buildings, including a pavilion, a Mess Hall, and cabins that could sleep more than 100 people. There was also a lake accessible from the cabin camp!

I showed it to Ken. He started to look at all the details and I could tell he was getting increasingly excited, but was trying to get his hopes up too much because of all our problems finding a venue. He said that we should call Prince William Forest Park in the morning to see if we could come see it. My reaction was a bit more tempered. I was in no hurry to go see another venue that would probably be yet another disappointment.

But, I agreed. I would call the next morning to see if we could see the Cabin Camp. Later that evening though, as we reviewed the Cabin Camp applications, we did realize that there would be one big downside of having our wedding there.  *Spoiler alert: we DID have our wedding there, so it wasn’t a dealbreaker, it just added some worry to our plate!*

More on that big downside in part 3!