Two weeks ago, I shared with you our engagement story. I’ve gotten a few e-mails about my ring, including why I wanted a sapphire ring. 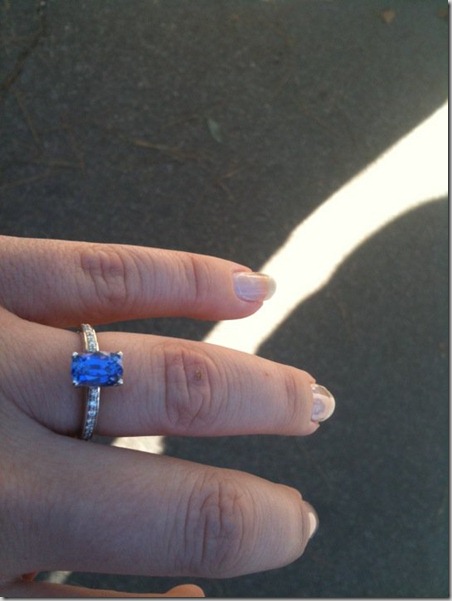 When Ken and I first started to discuss the idea of getting married (around August 2010), we, of course, discussed engagement ring ideas. I provided him some pictures of what I liked, price ranges, but told him that I didn’t want to pick out the exact ring myself. I wanted the end product to be a surprise.

My primary request was a single sapphire stone, with perhaps a diamond band. There were a few reasons I wanted a sapphire. I like the fact that sapphires are rarer and more valuable than diamonds (but less expensive because demand is lower for sapphires). Diamond prices are kept artificially high because supply is restricted by monopolies. Second, I just thought that diamonds were kind of boring. I wanted to have something that really popped! And now, 18 months since we got engaged, I still stare at my ring in admiration. I love everything about it.

Shopping for a Sapphire Engagement Ring

We headed off to some jewelry stores so I could try on some options and narrow down my design preferences a bit more, like whether I liked round stones, princess cut, etc.

We were not met with open arms.

Jewelry stores make big bucks selling diamonds. Instead of sticking with selling us what we actually wanted, the stores insisted on trying to sell us what we didn’t want.

Or along these lines:

Us: We would like to look at sapphire engagement rings.
Salesman: Okay, but just to warn you, although sapphires are also very hard stones, diamonds are more than 100 times harder than a sapphire.
Melissa: Dude, I don’t need my engagement ring to cut glass.  I want something I think looks nice.

Or our personal favorite:

Us: We would like to look at sapphire engagement rings.
Salesman: Oh, well, we don’t have any sapphires to show you.
Saleslady who overheard salesman: Well, we could take some of our diamond stones and color them with a blue magic marker!
Us: *blank stare*
Saleslady: Oh, we’ve done it before!
The saleslady then proceeds to take a large, loose diamond out of the jewelry case, then takes a fat blue crayola marker, yes, just like what you used in elementary school, and coats the diamond in blue marker.  Then she carefully placed the now colored stone in a setting that I liked to see the combination together.  After she was done showing the stone, she simply dropped the diamond in a cup of rubbing alcohol and all the magic marker color was removed.

Although we appreciated the saleslady’s help with the magic marker, it was evident that traditional jewelry stores are not geared toward selling colored gemstones.

Ken coined the joke, “HE WENT TO JARED! And then he left.”

Although I really wonder if their tune has changed now that sapphires might be more popular because of Kate Middleton’s sapphire engagement ring.

After Ken proposed to me in France, he proceeded to tell me how he finally managed to buy a sapphire ring for me!

Ken ventured onto the Natural Sapphire Company’s website.  Ken selected a few loose stones that he wanted to see, and the company shipped the loose stones to him for his review.  After deciding on the stone he wanted, he had to ship back the stones, according to the store’s strict shipping instructions (do not list the contents or value on the shipping slip!), and placed an order for the sapphire stone and setting.

Ken asked the Natural Sapphire Company to inform him when the item shipped, so that he would be sure to get home before me that day.

** Side story.  It’s related, I promise. **  We had discovered they had some sort of huge bugs in our attic during the summer of 2010.  Not just bugs, actually.  Cicada killer wasps.  Ken made a quick call to the exterminator, who said they would come the next day at some point between 8AM and 10AM.  So, I decided that I would go into work late that morning so I could be there for the exterminator.  **End side story.**

A few hours after making the appointment with the exterminator, Ken got an e-mail saying that the ring would be delivered the next day by 10:00AM.  Scheduled right at the time that I would be home waiting for the exterminator.  Any other time I’d be at work.  Not wanting to act suspicious and tell me not to stay home for the exterminator since they had just discussed it a few hours earlier, Ken just kept his fingers crossed.

The next morning, according to Ken, I was at home waiting for the exterminator.  As with any home service company, they called to say they were running late and probably wouldn’t get there until after 10AM.  Not wanting to wait at home any longer, I called Ken and said that I was going to leave for work since the exterminators said they could do all the work from outside.

That same day, our home cleaning service was also scheduled to come.  We have security cameras in our house and we get e-mail alerts any time doors in our house are opened. Shortly after I left, Ken knew that the cleaning lady had arrived thanks to the e-mail alert, and also knew that FedEx should be coming by any minute to drop off the package.

Ken was keeping a close eye on the security camera feeds.  Then finally, he saw the cleaning lady walk over to the front door, open the door, sign for a package from FedEx, and put the package on the bench in their foyer.  In fact, Ken and all his coworkers watched the events unfold on the security cameras.  Ken breathed a huge sign of relief and made sure he got home before me that afternoon, and hid the package!

When Ken proposed, I was BLOWN AWAY by how beautiful the ring was. And I still am! I still don’t know anybody else (personally) that has a non-diamond engagement ring, so I’m actually kind of happy that the Kate Middleton trend never caught on!

How about you all? Any funny stories about your fiancé buying your ring? 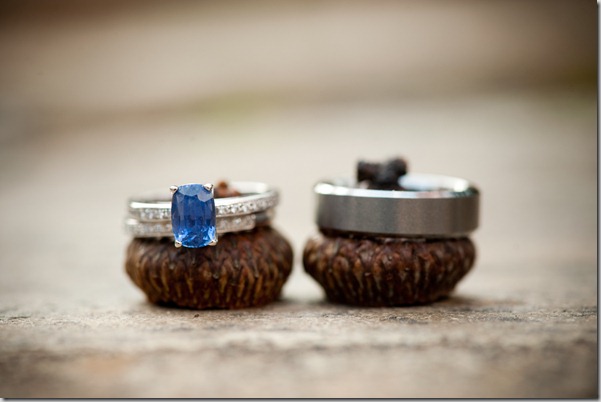 The most annoying part about wedding planning stress is …

Saw a link to this posted by The Natural Sapphire Company on Facebook. I didn’t want a diamond either, and we got my white sapphire engagement ring from them. I LOVE it. I have a plain wedding band but plan for an sapphire anniversary band someday. 🙂 I <3 sapphires.

I just found your site after doing a Google search for “sapphire engagement ring with skinny band” and I just want to say your ring is GORGEOUS! Ever since I was a little girl I’ve always said I wanted a sapphire ring and that I don’t understand why diamonds are the norm because they’re so boring! I loved reading your story too. 🙂 Good luck with your wedding planning/marriage!