I am really pleased with my decision to do my own makeup on my wedding day. As trivial as it sounds, it was a decision I really struggled with for a long time. But after my terrible hair and makeup trial in August, I realized that I would probably be unhappy if I didn’t do my own makeup.

A few caveats. I consider myself to be knowledgeable about makeup. I’ve taken classes at MAC, subscribe to YouTube makeup tutorials, and own probably about $1000 worth of makeup. I’m comfortable using four shades of eyeshadow in one look and am not afraid to ask artists at the MAC makeup counter for help and tips. So, it’s not like I go barefaced every day and then all of a sudden decided to DIY my wedding-day makeup. As an added caution, I even watched several DIY wedding day makeup tutorials. 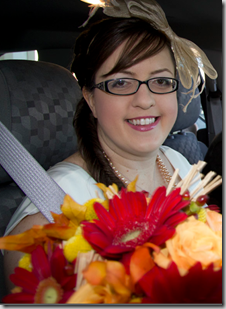 My biggest concern was having makeup that lasted. For instance, my makeup looks very different at the end of my work day compared to the beginning of my workday. I bought an airbrush makeup set from Dinair, but didn’t like it at all, so I returned it. It made my normally-oily skin feel dry, and the coverage lasted no longer than my regular foundation. I also had a hard time getting a precise color match.  It was nowhere near worth the price tag.

So, I stuck with my tried and true MAC Studio Fix Fluid Foundation.

While I have no regrets about DIYing my wedding day makeup, here are a few lessons learned I would offer to other brides doing the same.

(Image: Personal Photo, taken getting into the car shortly after doing my whole makeup thang) 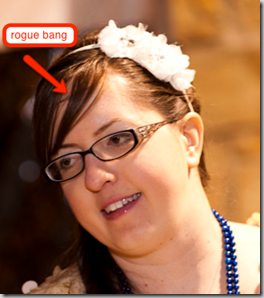 The only new items I had to purchase were the MAC False Lashes Mascara and Mascara Prep+Prime (I wanted to make sure I had a high-quality waterproof mascara for that day. Something that typically is not a priority for me), and the brow coloring, since that’s also something I usually don’t trouble myself with during my daily makeup routine.

So, there you have it. I saved myself about $250 by doing my own makeup. So, if you’re comfortable doing your own makeup on a regular basis, I’d highly recommend doing it yourself on your wedding day.

I hated my hair and makeup trial

Thanks for the tips! I have super oily skin so I might wash my foundation off and start over before cake cutting and dances. PS you look STUNNING in your photos!!!