Home Honeymoon We Decided on our Minimoon Destination
Honeymoon

We Decided on our Minimoon Destination

We have finally decided on our minimoon location!  I had discussed before why we weren’t going on a honeymoon right away, and some minimoon ideas a few months back.

Initially, I wanted to stay within driving distance of DC for a minimoon.  But you know what?  Overnight vacations are really expensive around here.  We were finding that bed-and-breakfasts in Shenandoah or Annapolis can cost more than $250/night.  To have some crappy little room that doesn’t even have its own bathroom?  I don’t care how “charming” it is.  No thank you!

So, we have decided on one of my all-time favorite vacation spots.  Vegas!  My fiancé and I went there once together back in 2008, and I have been to Vegas probably about a dozen times.  I think I mentioned this on here before, but my dad worked in the airline industry for nearly 40 years, so I grew up flying for free.  And we went to Vegas a lot on vacation since we didn’t have a whole lot of money growing up and the hotels and food were always so cheap.

I mentioned in our honeymoon post that we’re much more willing to spend money on a honeymoon than on our wedding, because, as I’ve said before, we keep ourselves on a budget by choice, not by circumstance.  But, it looks like Vegas will be pretty cheap for us!  I have two Southwest Rewards tickets that we can use to go there.  Although one of them expired so, we’ll have to pay $50 each way to get the reward ticket re-issued.  Typically I’m loathe to use reward tickets to places that typically have such cheap airfare (like Vegas and Orlando and such), but, my second free ticket would be expiring soon after the wedding anyway, so we’ll just use them up.

So, two plane tickets to Vegas will be $110.  ($100 for re-issuing the round-trip ticket, plus a $5 each security fee that is not included in the reward fare).

Keeping Other Expenses Low in Vegas

We signed up for e-mail alerts for hotels that we’re interested in and that have the nicest suites (The Cosmopolitan looks great) and I signed up for Living Social and Groupon deals for Las Vegas to keep an eye out for good show deals.  The last time we were in Vegas we bought a same day ticket to Ka, one of many many Cirque du Soleil shows out there, and it was much more reasonable than buying it in advance.

Neither one of us like to gamble, so we won’t have to worry about spending a lot on gambling.  We’re not opposed to gambling or anything, we just find it boring.  Although, while waiting for Ka to open its doors for the show — they make people wait on the casino floor, go figure! —  I put $10 in a nickel slot machine and walked away with $72.65.  Not too shabby!. 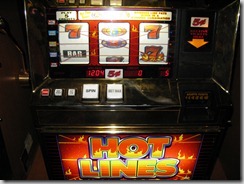 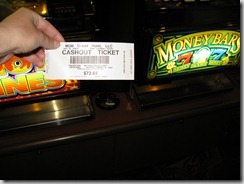 Neither of us are into clubbing or anything like that, so our expenses should be pretty low.  Our pre-show meal the last time was at In-n-Out burger (love that place and gotta take advantage of it while on the West Coast since they don’t have any out our direction) so we’re pretty low maintenance on food too.

Non-Gambling things to do in Vegas

A lot of people wonder what there is to do in Las Vegas if you don’t like to gamble or go clubbing.  Well, in addition to the basics (the shows, the art museum and botanical garden at the Bellagio, walking around the amazing hotels, the fountain show at the Bellagio, going to the top of The Paris, shopping, gondola rides at The Venetian, etc.) I’ve been making a list of things to do while we’re there that we didn’t do the last time.  The shows are probably where the bulk of our expenses would be.

One or more of the following shows:

And the following things around Vegas

Of course, we’re only planning on going for 4 or 5 days, so we likely won’t have time to do all of that, but that’s okay, we’ll just keep it on our list for the next trip there.

We’re on our Minimoon! [and Happy Thanksgiving]

[…] But then we decided that a minimoon would be a great idea, so we contemplated some of our options, and then subsequently decided on Las Vegas! […]